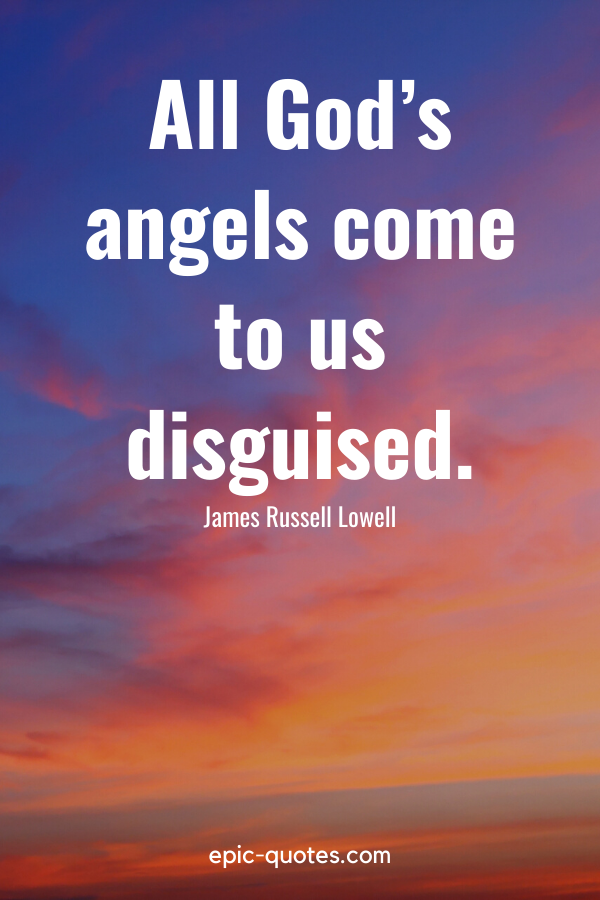 “All God’s angels come to us disguised.” -James Russell Lowell 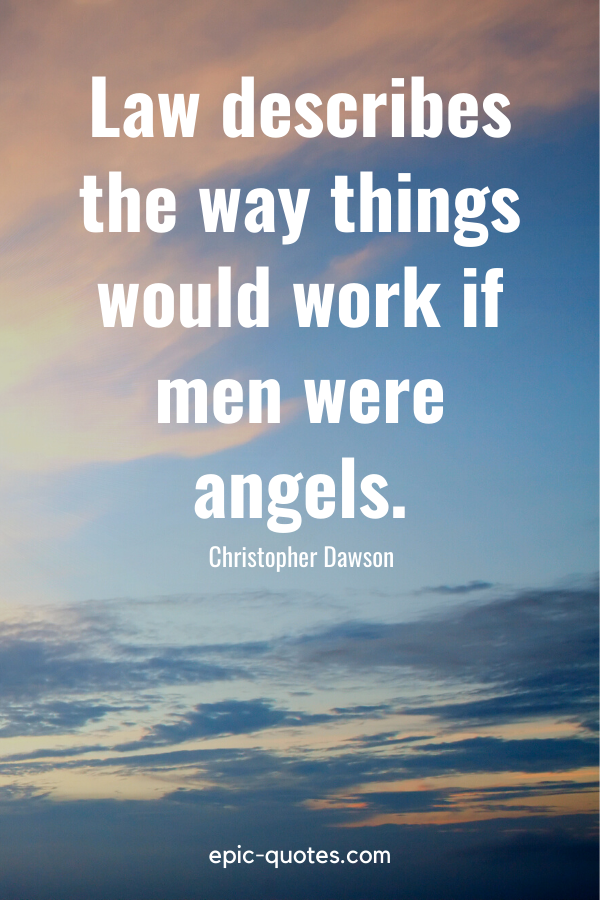 “Law describes the way things would work if men were angels.” -Christopher Dawson 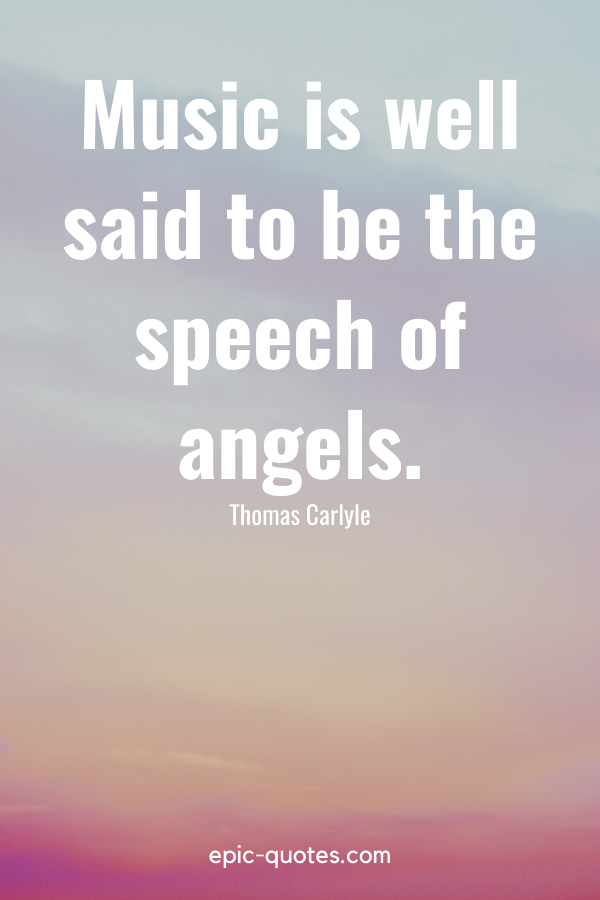 “Music is well said to be the speech of angels.” -Thomas Carlyle 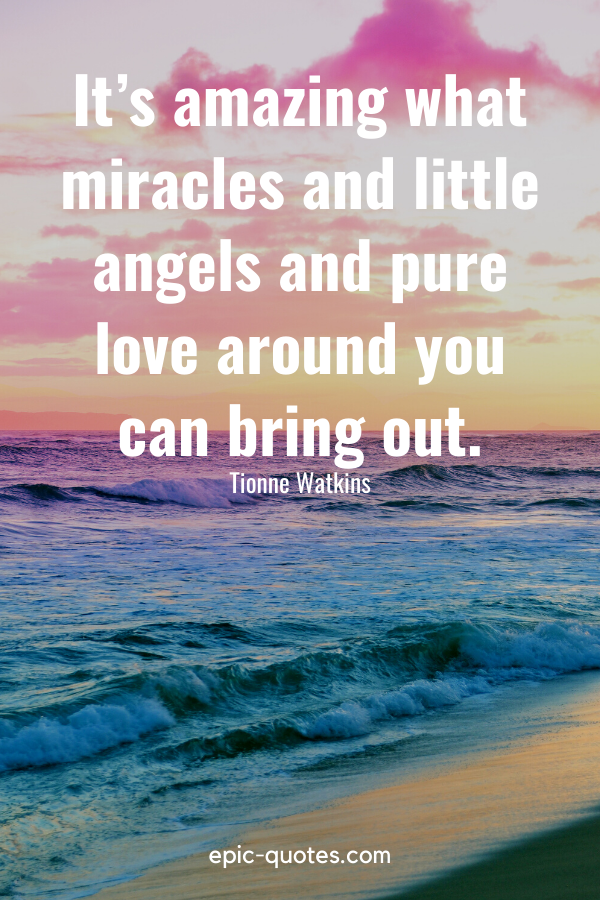 “It’s amazing what miracles and little angels and pure love around you can bring out.” -Tionne Watkins 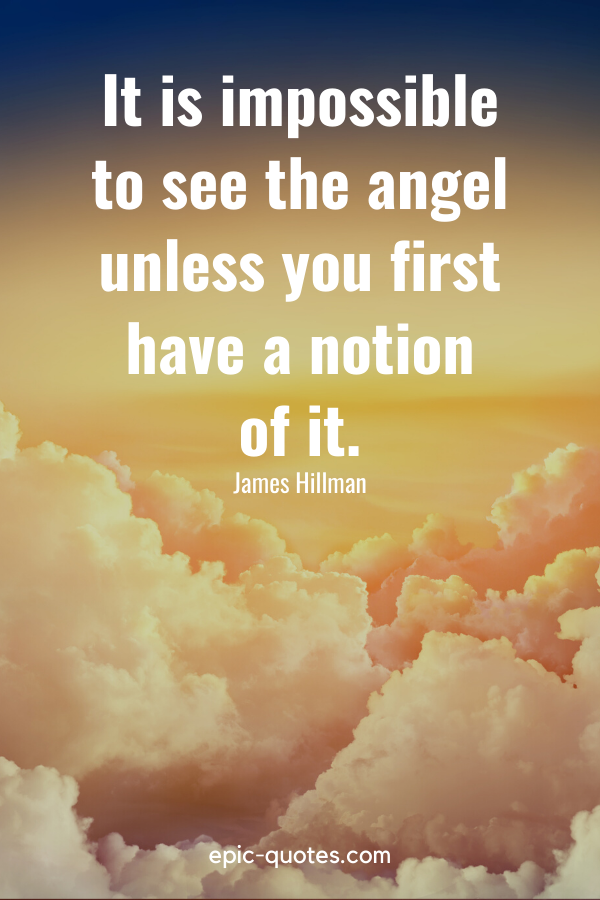 “It is impossible to see the angel unless you first have a notion of it.” -James Hillman 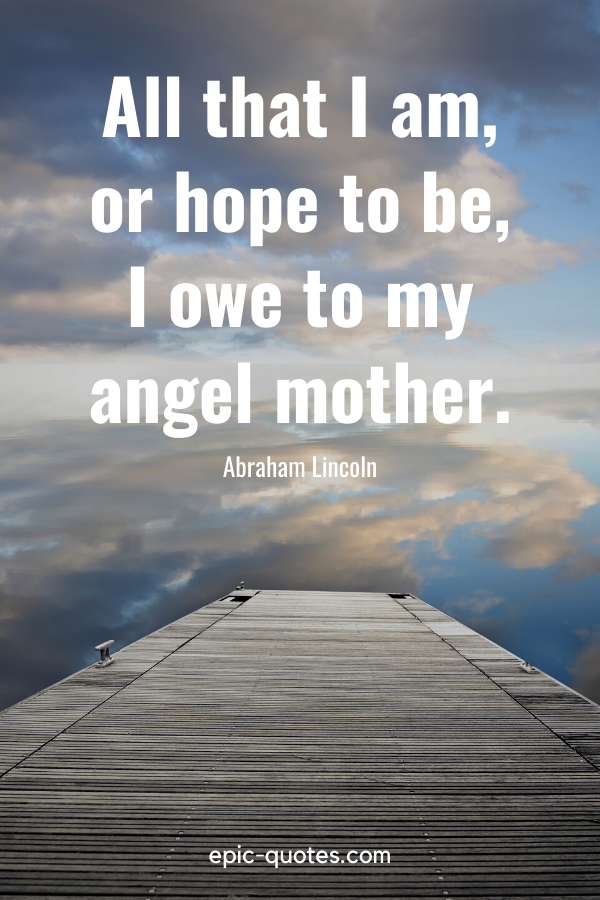 All that I am, or hope to be, I owe to my angel mother.” -Abraham Lincoln 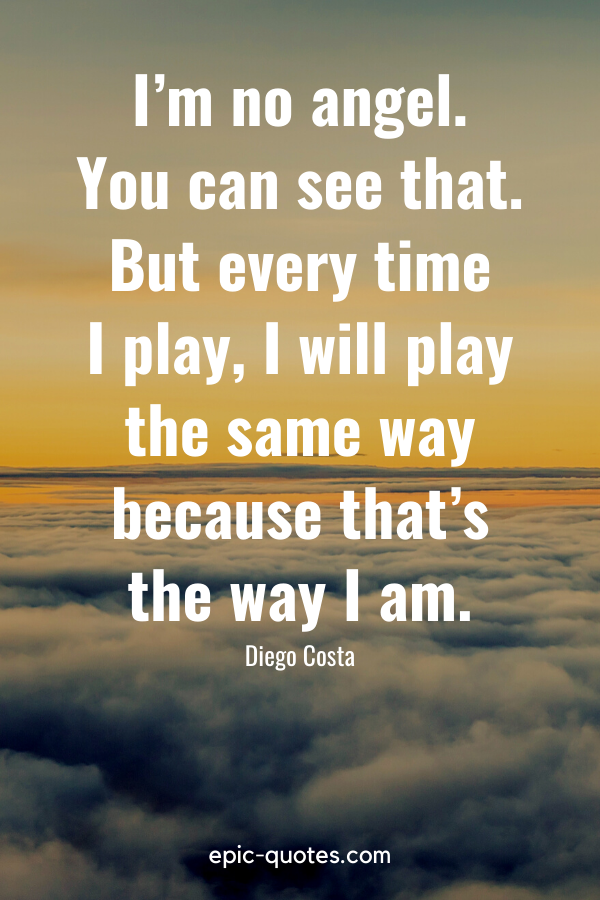 “I’m no angel. You can see that. But every time I play, I will play the same way because that’s the way I am.” -Diego Costa 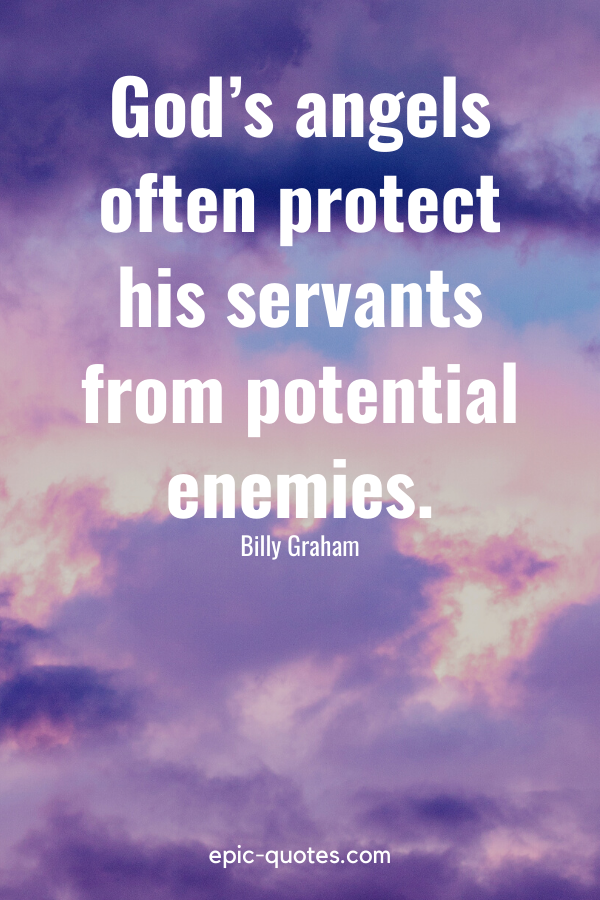 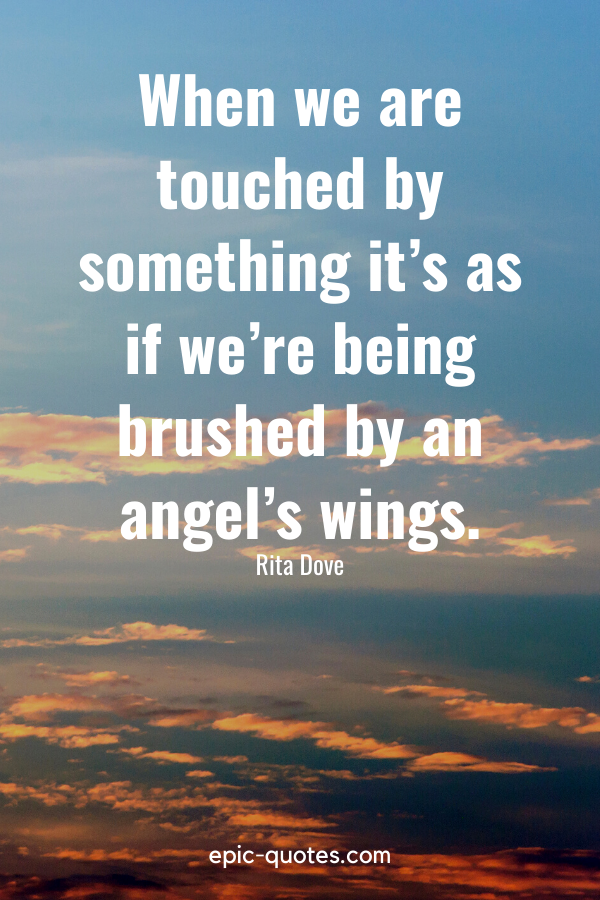 “When we are touched by something it’s as if we’re being brushed by an angel’s wings.” -Rita Dove 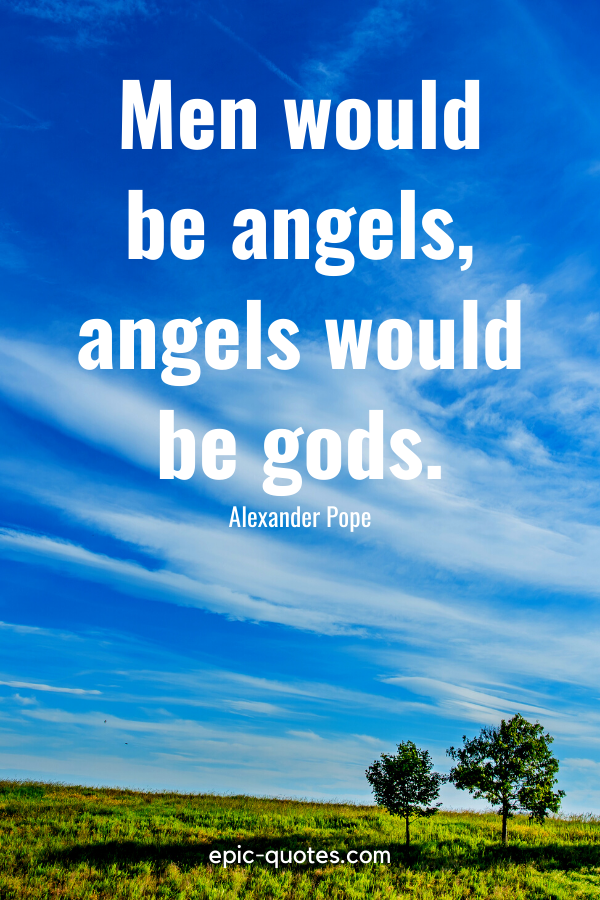 “Men would be angels, angels would be gods.” -Alexander Pope 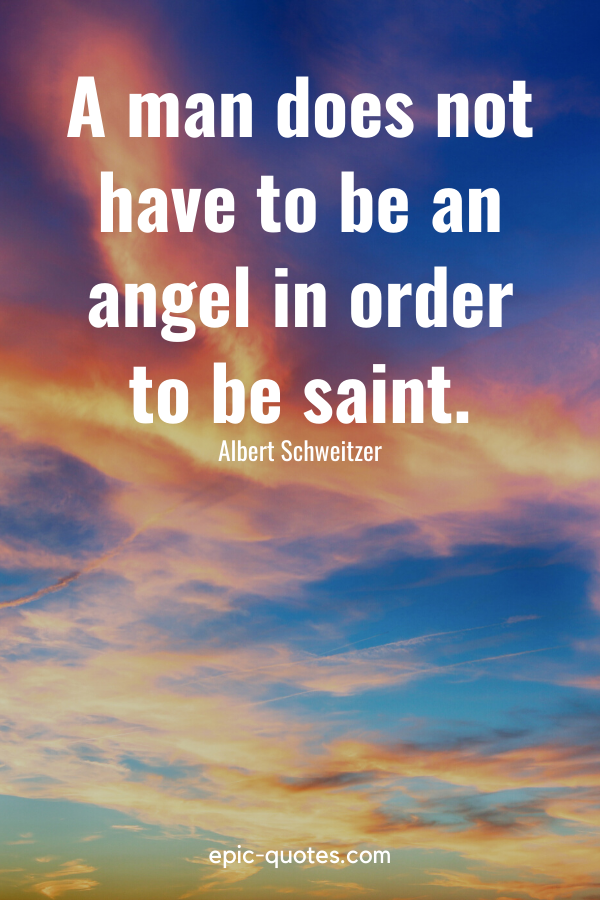 “A man does not have to be an angel in order to be saint.” -Albert Schweitzer 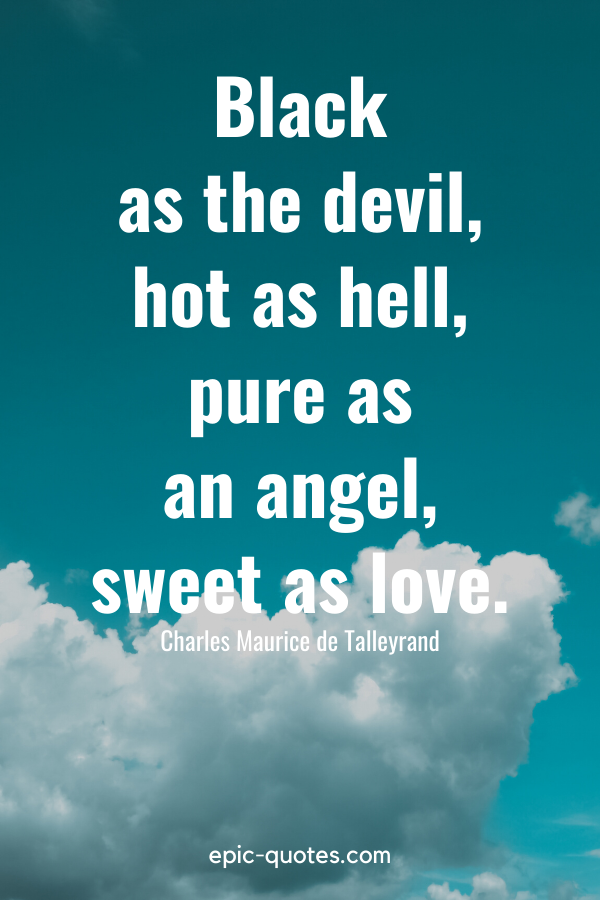 “Black as the devil, hot as hell, pure as an angel, sweet as love.” -Charles Maurice de Talleyrand 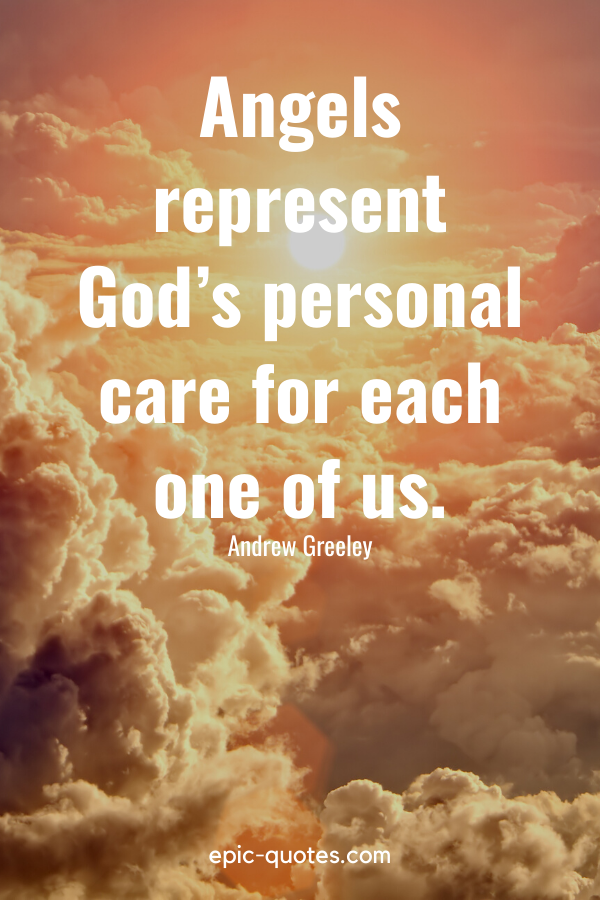 “Angels represent God’s personal care for each one of us.” -Andrew Greeley 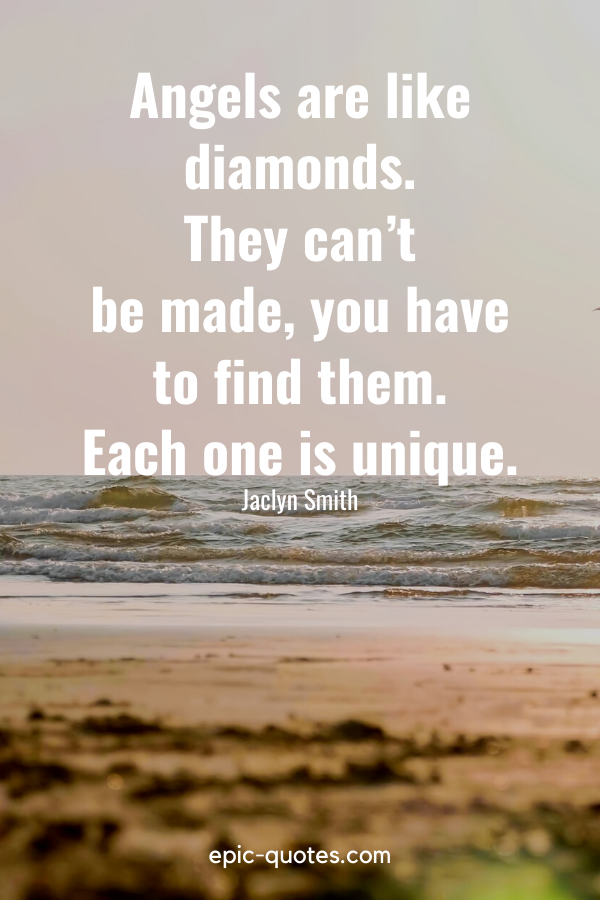 “Angels are like diamonds. They can’t be made, you have to find them. Each one is unique.” -Jaclyn Smith 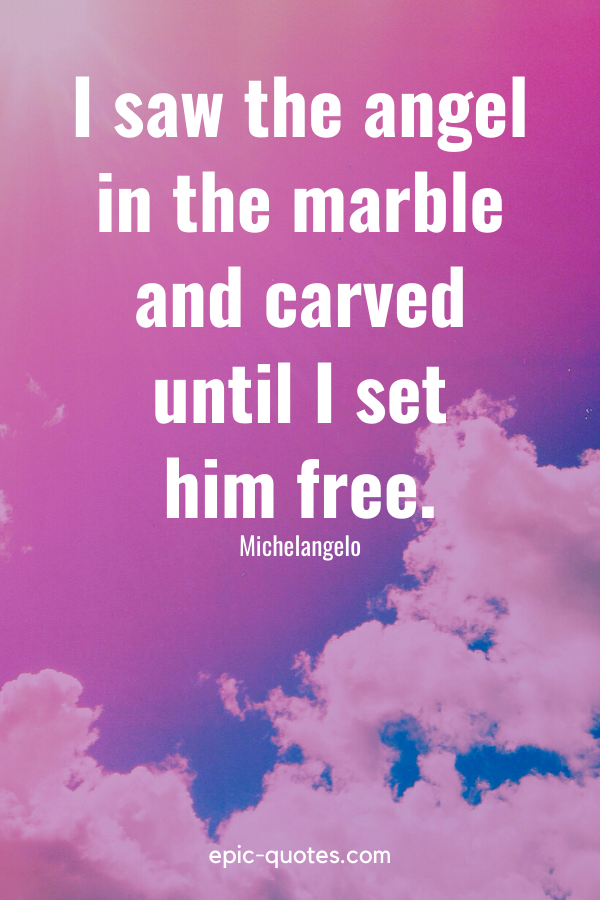 “I saw the angel in the marble and carved until I set him free.” -Michelangelo 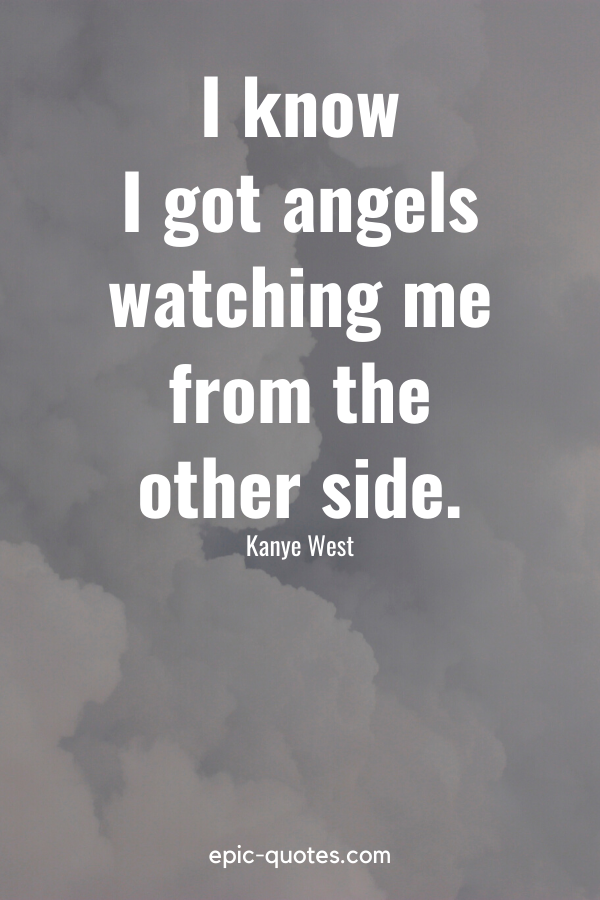 “I know I got angels watching me from the other side.” -Kanye West 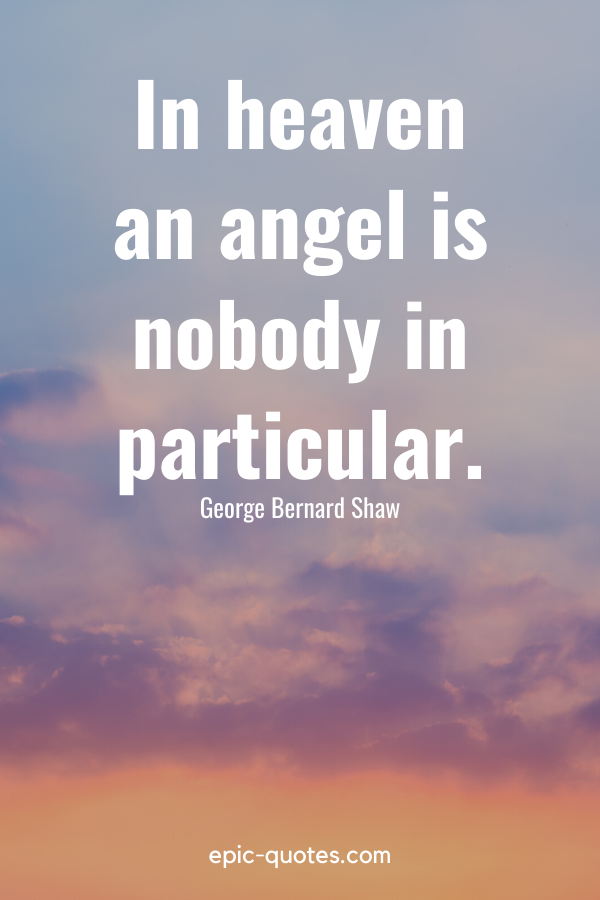 “In heaven an angel is nobody in particular.” -George Bernard Shaw 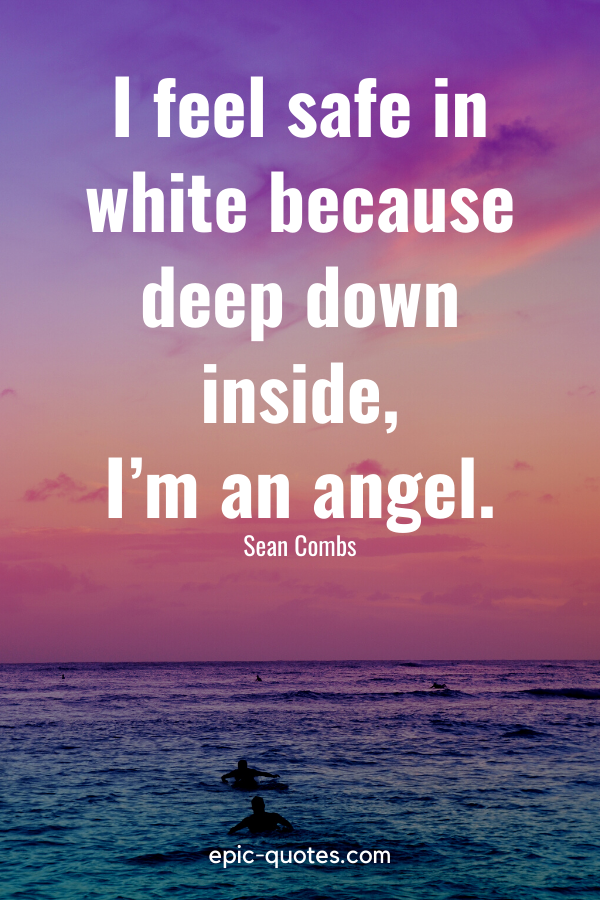 “I feel safe in white because deep down inside, I’m an angel.” -Sean Combs 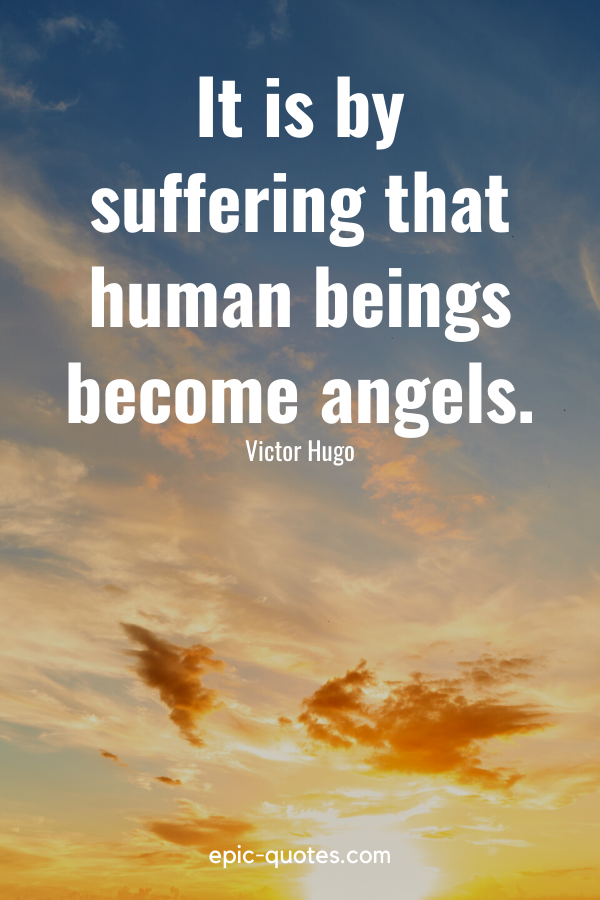 “It is by suffering that human beings become angels.” -Victor Hugo 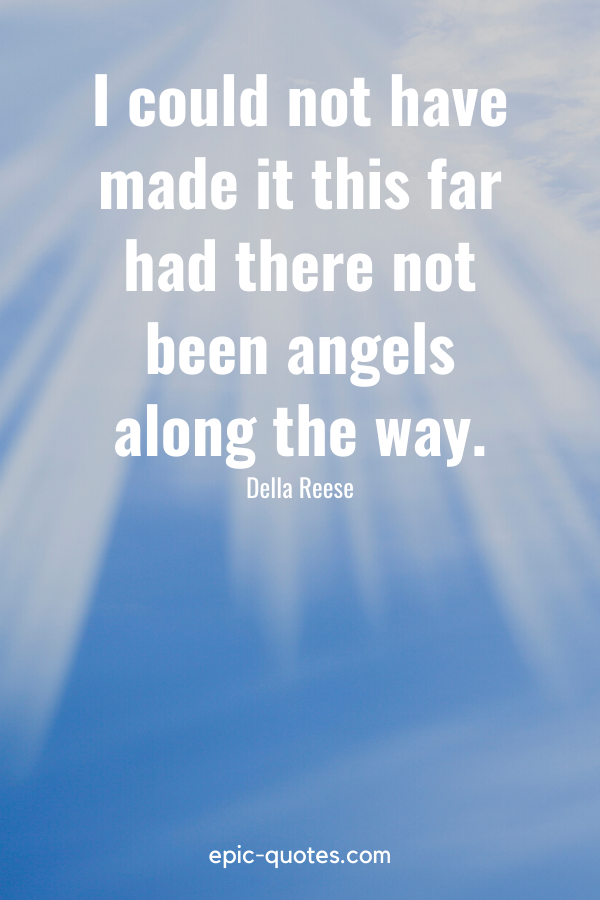 “I could not have made it this far had there not been angels along the way.” -Della Reese 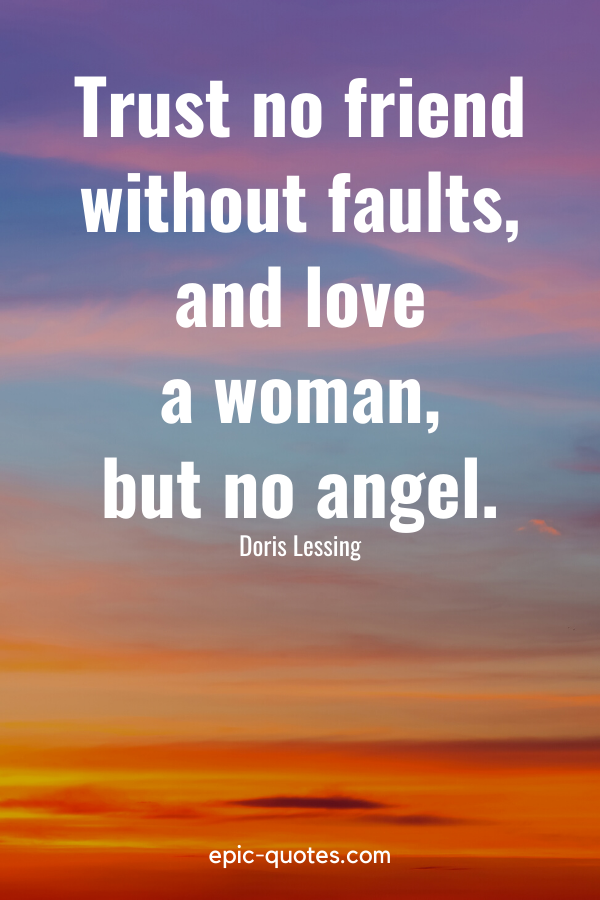 “Trust no friend without faults, and love a woman, but no angel.” -Doris Lessing 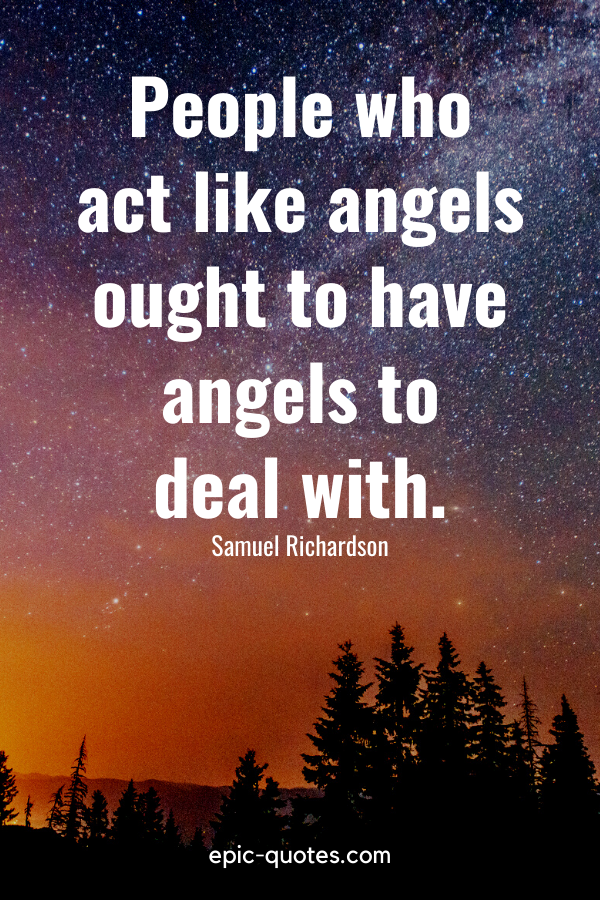 “People who act like angels ought to have angels to deal with.” -Samuel Richardson 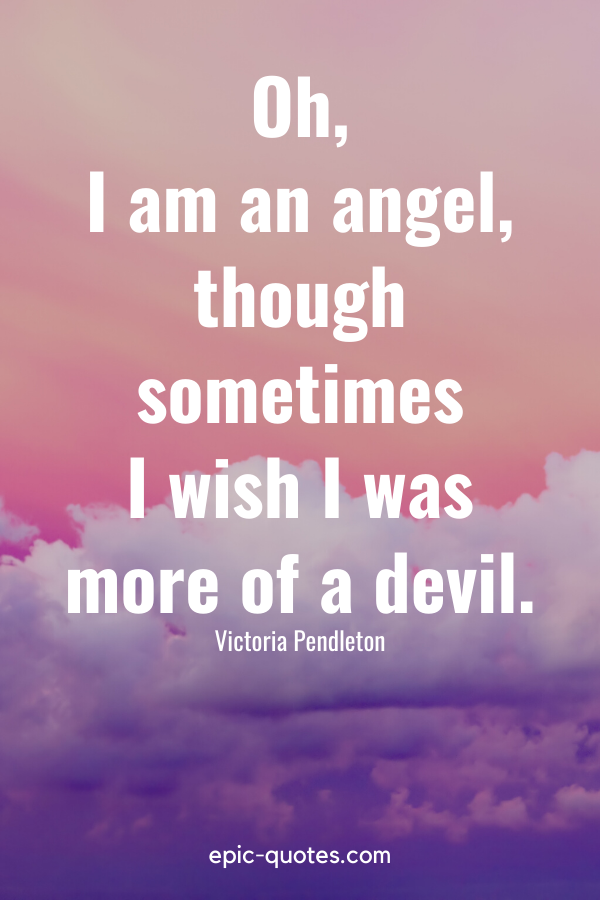 “Oh, I am an angel, though sometimes I wish I was more of a devil.” -Victoria Pendleton

“I am an angel. I was sent here from God to heal.” -Kevin Hart 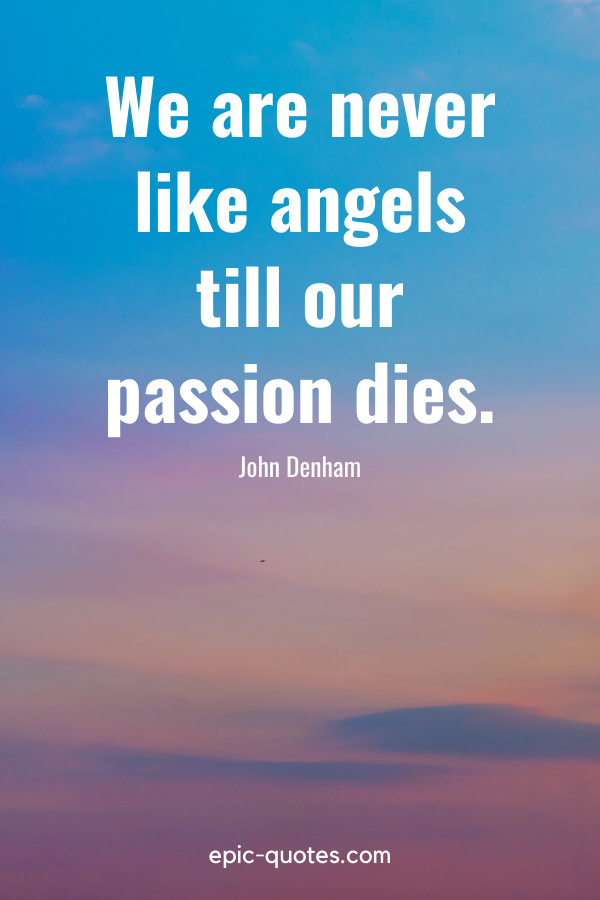 “We are never like angels till our passion dies.” -John Denham 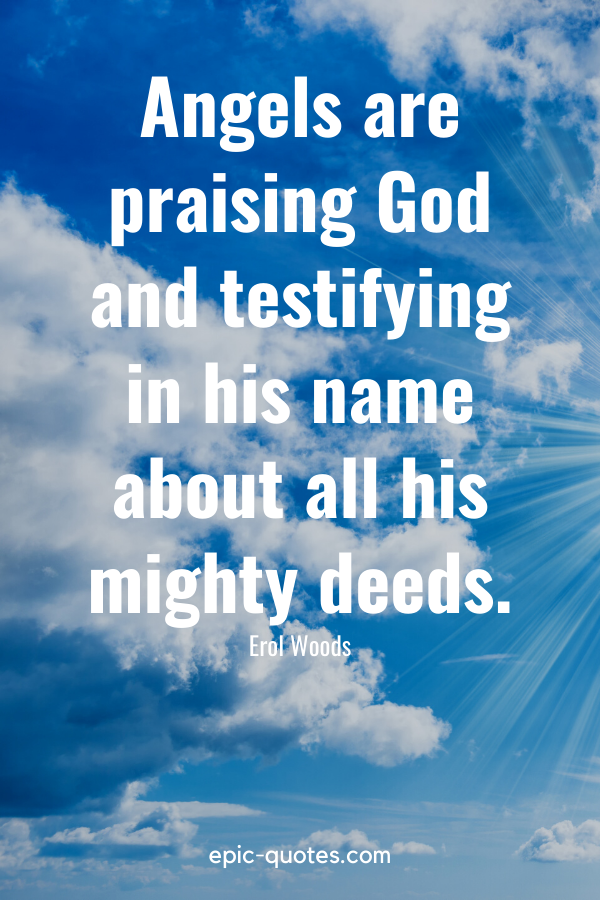 “Angels are praising God and testifying in his name about all his mighty deeds.” -Erol Woods 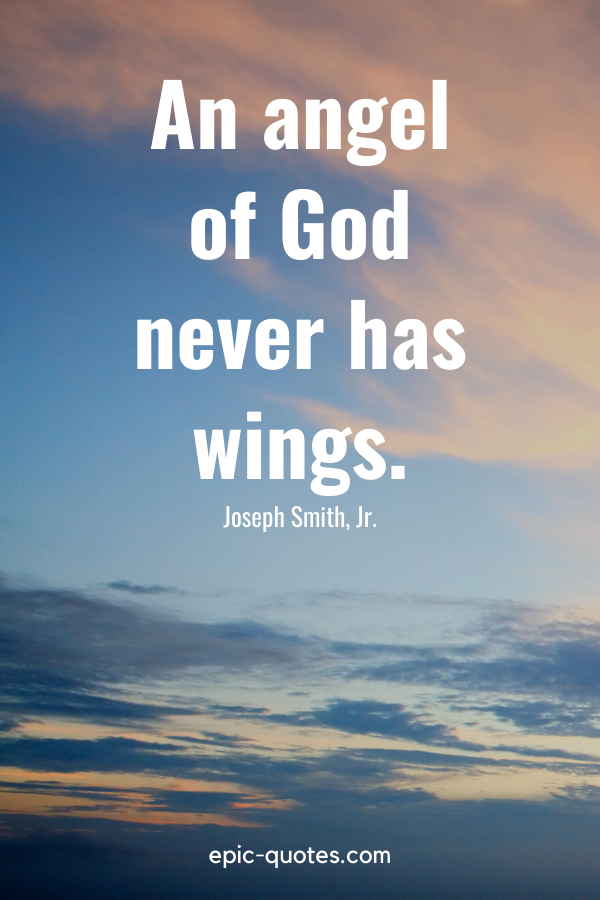 “An angel of God never has wings.” -Joseph Smith, Jr. 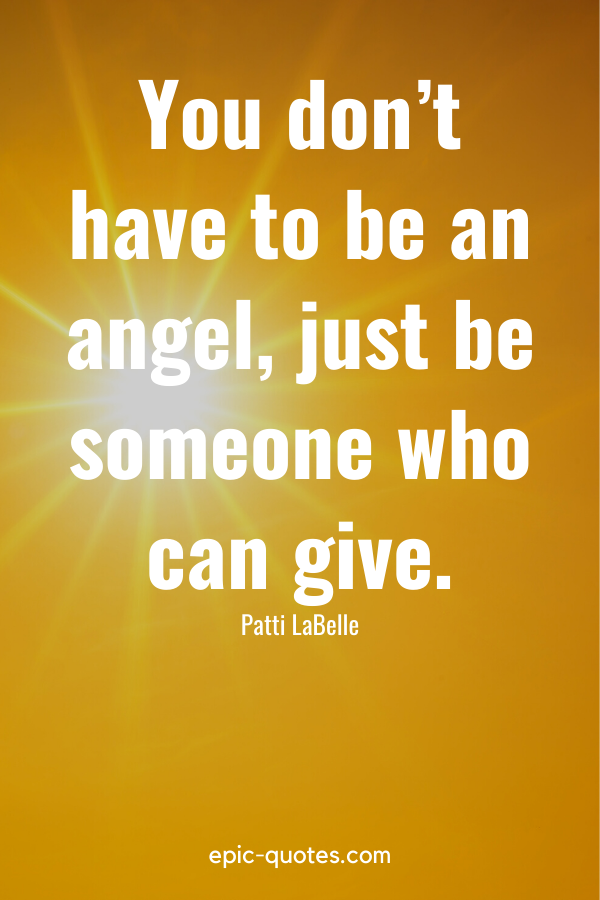 “You don’t have to be an angel, just be someone who can give.” -Patti LaBelle