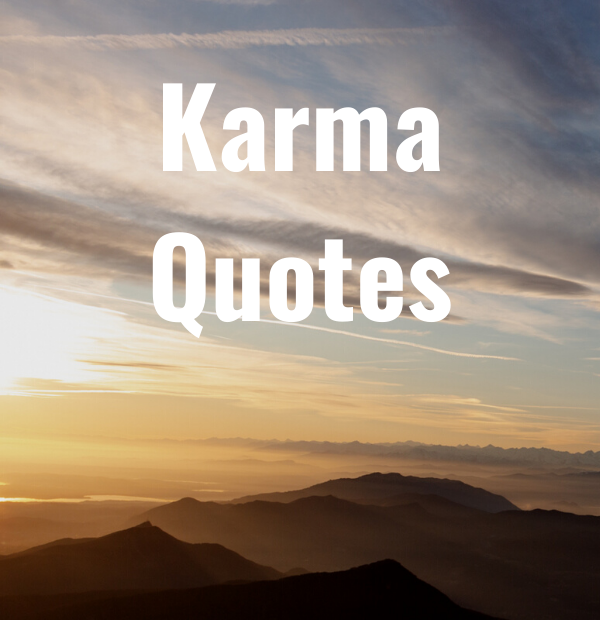 “How people treat you is their karma; how you react is yours.”

“There’s a natural law of karma that vindictive people, who go out of their way to hurt others, will end up broke and alone.”

“The ones you judge today, may be the judgments you endure tomorrow.”

“Don’t waste time on revenge. The people who hurt you will eventually face their own karma.”

“As long as karma exists, the world changes. There will always be karma to be taken care of.”

“I used to steal a lot. But I don’t do that anymore, because I believe in karma.”

“Your karma should be good, and everything else will follow. Your good karma will always win over your bad luck.”

“I’m a very firm believer in karma, and put it this way: I get a lot of good parking spots.”

“Karma, had finally made her way around, and had just bitch-slapped me right across the face.”

“Karma is a cruel mistress.”

“Karma is a tricky thing. To serve Karma, one must repay good Karma to others.”

“Karma has a surprising way of taking care of situations. All you have to do is to sit back and watch.”

“When you do something bad: it comes back to you later.”

“I try to live with the idea that karma is a very real thing. So I put out what I want to get back.”

“Nobody deserves misery but sometimes it’s just your turn.”

“Even chance meetings are the result of karma… Things in life are fated by our previous lives.”

“Don’t judge each day by the harvest you reap but by the seeds that you plant.”

“Karma is not just about the troubles, but also about surmounting them.”

“You win some, you lose some, let Karma takes its course.”

“Karma has no problem getting back in touch with you when need be.”

“Men are not punished for their sins, but by them.”

“You are free to choose, but you are not free from the consequence of your choice.”

“By each crime and every kindness, we birth our future.”

“Like gravity, karma is so basic we often don’t even notice it.”

“I’m a believer in karma, and I’m also a believer that things happen for a reason.”

“A boomerang returns back to the person who throws it.”

“Karma comes after everyone eventually.”

“Karma can be seen as a curse or a gift because it keeps us attached to this world.”

“As she has planted, so does she harvest; such is the field of karma.”

“You have to be very careful when involving yourself with someone else’s karma.”

“Karma bides it’s time. You will always have to watch out. Karma is unforgiving and always gets payback.”

“If karma doesn’t catch up, God will surely pick up the slack.”

“I heard that karma is vengeful and is also a light sleeper.”

“I’m a true believer in karma. You get what you give, whether it’s bad or good.”

“This is your karma. You do not understand now, but you will understand later.”

“I never kill insects. If I see ants or spiders in the room, I pick them up and take them outside. Karma is everything.”

“I want revenge, but I don’t want to screw up my karma.”

“Regardless of what we do, our karma has no hold on us.”

“I believe in karma, and I believe if you put out positive vibes to everybody, that’s all you’re going to get back.”