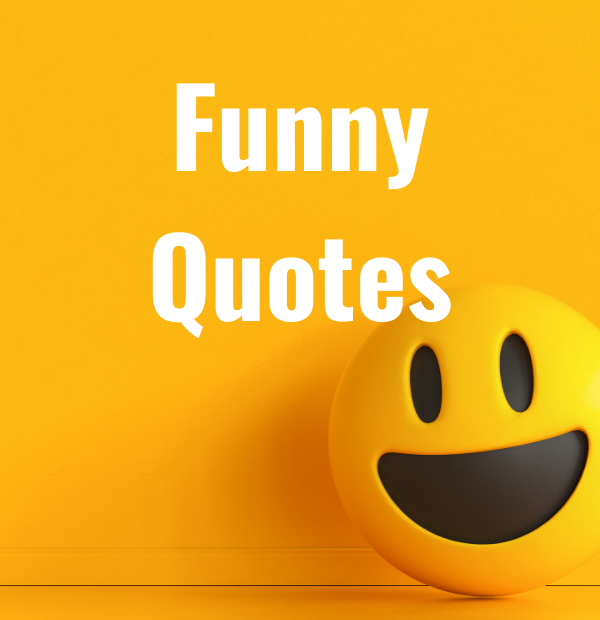 “Nobody realizes that some people expend tremendous energy merely to be normal.”

“The difference between stupidity and genius is that genius has its limits.”

“Wine is constant proof that God loves us and loves to see us happy.”

“All right everyone, line up alphabetically according to your height.”

“He who laughs last didn’t get the joke.”

“A day without laughter is a day wasted.”

“Light travels faster than sound. This is why some people appear bright until you hear them speak.”

“High heels were invented by a woman who had been kissed on the forehead.”

“I’m too drunk to taste this chicken.”

“The average dog is a nicer person than the average person.”

“If you think you are too small to make a difference, try sleeping with a mosquito.”

“Most people would sooner die than think; in fact, they do so.”

“The digital camera is a great invention because it allows us to reminisce. Instantly.”

“I was born to make mistakes, not to fake perfection.”

“To err is human; to admit it, superhuman.”

“I drink to make other people more interesting.”

“Trouble knocked at the door, but, hearing laughter, hurried away.”

“Leave something for someone but dont leave someone for something.”

“You’re only as good as your last haircut.”

“If you can’t live without me, why aren’t you dead already?”

“I don’t believe in astrology; I’m a Sagittarius and we’re skeptical.”

“If you live to be one hundred, you’ve got it made. Very few people die past that age.”

“The world is full of magical things patiently waiting for our wits to grow sharper.”

“Going to church doesn’t make you a Christian any more than going to a garage makes you an automobile.”

“Great art is the contempt of a great man for small art.”

“As long as people will accept crap, it will be financially profitable to dispense it.”

“My opinions may have changed, but not the fact that I’m right.”

“I always arrive late at the office, but I make up for it by leaving early.”

“Never under any circumstances take a sleeping pill and a laxative on the same night.”

“If you’re going to tell people the truth, be funny or they’ll kill you.”

“Political correctness is tyranny with manners.”

“Have you noticed that all the people in favor of birth control are already born?”

“To be sure of hitting the target, shoot first, and call whatever you hit the target.”