“Freedom – to walk free and own no superior.” -Walt Whitman

“There is no such thing as part freedom.” -Nelson Mandela

“A place of freedom is the best place to have the most creativity.” -Matt McGorry

“If you’re not ready to die for it, put the word ‘freedom’ out of your vocabulary.” -Malcolm X

“When a truth is not given complete freedom, freedom is not complete.” -Vaclav Havel

“We cannot defend freedom abroad by deserting it at home.” -Edward R. Murrow

“I would rather die in freedom on my way back home than starve to death here.” -Morning Star

“I find only freedom in the realms of eccentricity.” -David Bowie

“To enjoy freedom we have to control ourselves.” -Virginia Woolf

“Freedom is something that dies unless it’s used.” -Hunter S. Thompson

“The greatest threat to freedom is the absence of criticism.” -Wole Soyinka

“Art is the daughter of freedom.” -Friedrich Schiller

“Freedom is the right to tell people what they do not want to hear.” -George Orwell

“I believe that freedom of speech and freedom of religion go hand-in-hand in America.” -Kirk Cameron

“We gain freedom when we have paid the full price.” -Rabindranath Tagore

“I stand for freedom of expression, doing what you believe in, and going after your dreams.” -Madonna Ciccone

“I would like to be remembered as a person who wanted to be free… so other people would be also free.” -Rosa Parks

”Better to die fighting for freedom then be a prisoner all the days of your life.” -Bob Marley 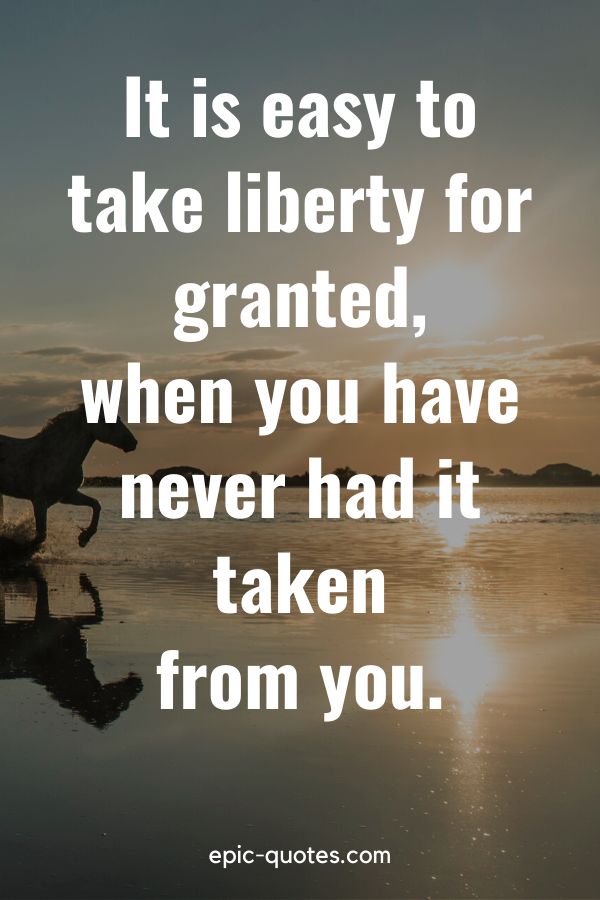 “It is easy to take liberty for granted, when you have never had it taken from you.”

“What then is freedom The power to live as one wishes.” -Marcus Tullius Cicero

“Freedom consists not in doing what we like, but in having the right to do what we ought.” -Pope John Paul II

“Live free or die Death is not the worst of evils.” -General John Stark

“Money won’t create success, the freedom to make it will.” -Nelson Mandela

“Love does not claim possession, but gives freedom.” -Rabindranath Tagore

“Man is free at the moment he wishes to be.” -Voltaire