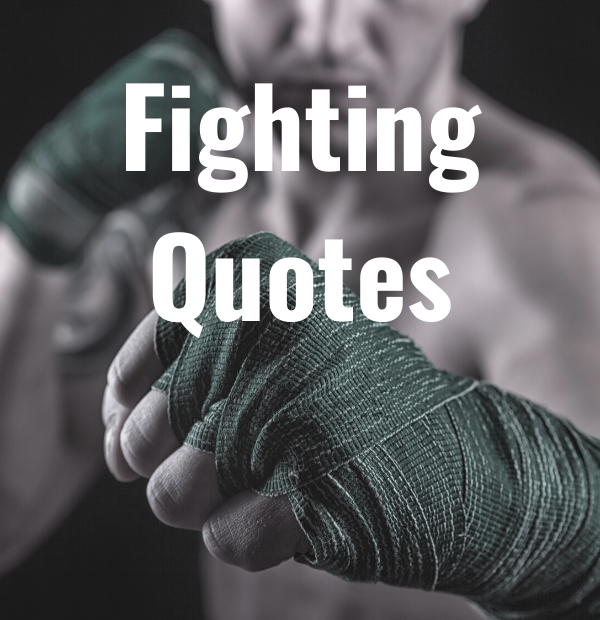 “Victory is always possible for the person who refuses to stop fighting.”

“We are twice armed if we fight with faith.”

“I don’t mind fighting as long as it’s for a good cause.”

“Be kind, for everyone you meet is fighting a hard battle.”

“Fights begin and end with handshakes.”

“The supreme art of war is to subdue the enemy without fighting.”

“I want to be an expert in different fighting styles, new training methods, new ways of thinking.”

“Strategy without tactics is the slowest route to victory. Tactics without strategy is the noise before defeat.”

“I’m fighting cancer and I refuse to give up.”

“It is easier to fight for one’s principles than to live up to them.”

“It seems that fighting is a game where everybody is the loser.”

“Fighting is essentially a masculine idea; a woman’s weapon is her tongue.”

“I didn’t realise I was going to be fighting the whole world.”

“I love fighting for what I believe in. I love having fun while doing it.”

“I consider myself a freedom fighter, fighting for my clients.”

“You either get tired fighting for peace, or you die.”

“Fighting is a very emotionally draining sport. I don’t want to waste time on drama beforehand.”

“You must not fight too often with one enemy, or you will teach him all your art of war.”

“I have been fighting over commas all my life.”

“Don’t fight a battle if you don’t gain anything by winning.”

“Fighting is not a man’s thing, it is a human thing.”

“There was no such thing as a fair fight. All vulnerabilities must be exploited.”

“Fighting, for me, is like skydiving without the parachute.”

“The fight is never about grapes or lettuce. It is always about people.”

“People who fight fire with fire usually end up with ashes.”

“Older men declare war. But it is youth that must fight and die.”

“There is no substitute for hard work. Never give up. Never stop believing. Never stop fighting.”