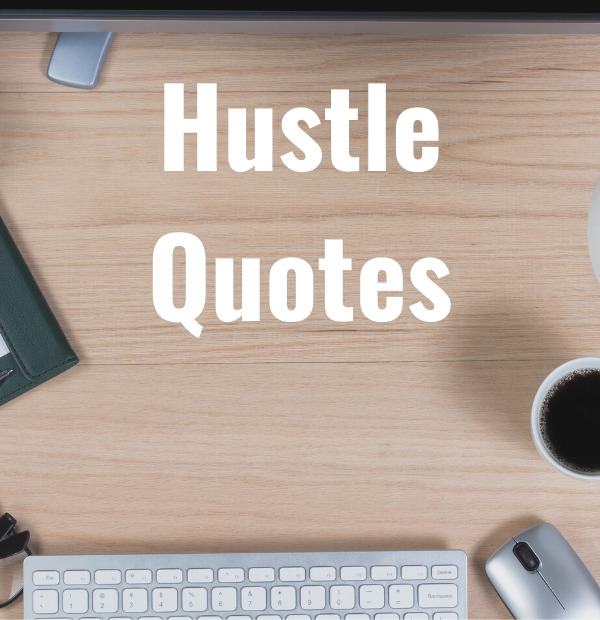 “Hustle is the most important word. Ever.”

“Good things happen to those who hustle.”

“What you lack in talent can be made up with desire, hustle and giving 110% all the time.”

“Things may come to those who wait, but only the things left by those who hustle.”

“I’m a firm believer in the hustle game.”

“All wealth is the product of labor.”

“The trouble with opportunity is that it always comes disguised as hard work.”

“Striving for success without hard work is like trying to harvest where you haven’t planted.”

“I learned the value of hard work by working hard.”

“Opportunities are usually disguised as hard work, so most people don’t recognize them.”

“Success is the result of perfection, hard work, learning from failure, loyalty, and persistence.”

“Work hard! In the end, passion and hard work beats out natural talent.”

“There is no substitute for hard work.”

“I’m living everyday like a hustle. Another drug to juggle. Another day, another struggle.”

“Nothing worth having comes easy.”

“I played the game one way. I gave it everything I had. It doesn’t take any ability to hustle.”

“Hustle in silence and let your success make the noise.”

“Focused, hard work is the real key to success.”

“My hustle is nonstop. I never stop hustling.”

“Success for an athlete follows many years of hard work and dedication.”

“The dream is free. The hustle is sold separately.”

“There are no secrets to success. It is the result of preparation, hard work, and learning from failure.”

“Don’t stay in bed unless you can make money in bed.”

“I’m a greater believer in luck, and I find the harder I work the more I have of it”

“Good things come to those who work their asses off and never give up.”

“There’s a lot of females that hustle, just like men hustle.”

“When I started flirting with the hustle, failure became my ex. Now engaged to the game and married to success.”

“Without hustle, talent will only carry you so far.”

“My entire life can be summed up in four word: I hustled. I conquered.”