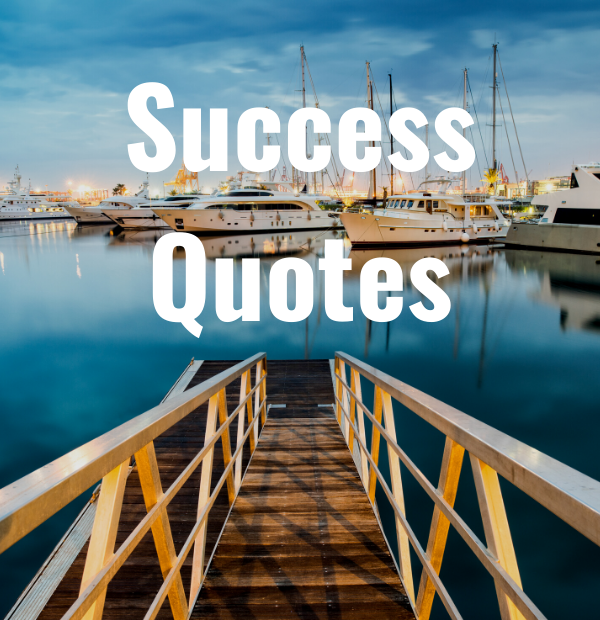 “Success is not final; failure is not fatal: It is the courage to continue that counts.”

“All progress takes place outside the comfort zone.”

“If you really look closely, most overnight successes took a long time.”

“The way to get started is to quit talking and begin doing.”

“There are no secrets to success. It is the result of preparation, hard work, and learning from failure.”

“Don’t be afraid to give up the good to go for the great.”

“Success is walking from failure to failure with no loss of enthusiasm.”

“Success usually comes to those who are too busy to be looking for it.”

“In order to succeed, your desire for success should be greater than your fear of failure.”

“The secret of success is to do the common thing uncommonly well.”

“If you are not willing to risk the usual, you will have to settle for the ordinary.”

“The secret to success is to know something nobody else knows.”

“Opportunities don’t happen. You create them.”

“I never dreamed about success, I worked for it.”

“Never give in except to convictions of honor and good sense.”

“The successful warrior is the average man, with laser-like focus.”

“The only place where success comes before work is in the dictionary.”

“The road to success and the road to failure are almost exactly the same.”

“Do one thing every day that scares you.”

“I failed my way to success.”

“You know you are on the road to success if you would do your job, and not be paid for it.”

“Many of life’s failures are people who did not realize how close they were to success when they gave up.”

“The difference between who you are and who you want to be is what you do.”

“The ones who are crazy enough to think they can change the world, are the ones that do.”

“The only limit to our realization of tomorrow will be our doubts of today.”

“I find that the harder I work, the more luck I seem to have.”

“Some people dream of success while others wake up and work.”

“Don’t let the fear of losing be greater than the excitement of winning.”

“It is better to fail in originality than to succeed in imitation.”