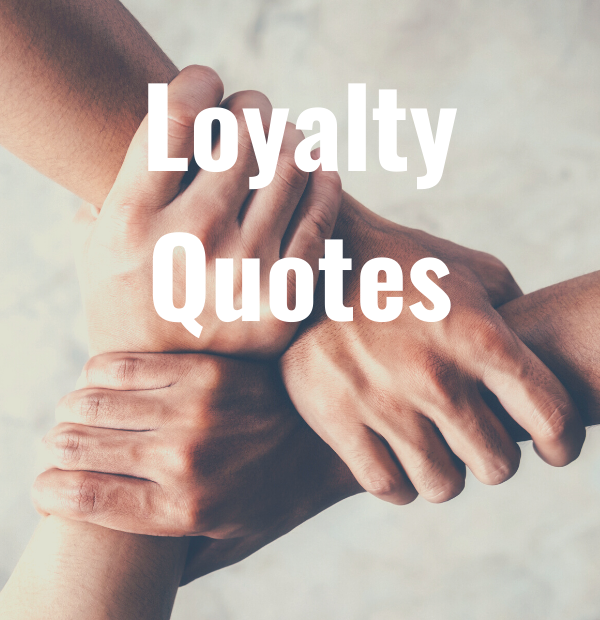 “Better to have one woman on your side than ten men.”

“Where the battle rages, there the loyalty of the soldier is proved.”

“I think a good friend, to me, is all about trust and loyalty. You don’t ever want to second-guess whether you can tell your friend something.”

“Never esteem anything as of advantage to you that will make you break your word or lose your self-respect.”

“Sometimes it was worth all the disadvantages of marriage just to have that: one friend in an indifferent world.”

“A true friendship is one in which everything can be told, and nothing will be judged.”

“Loyalty is a characteristic trait. Those who have it, give it free of charge.”

“Loyalty is from above, betrayal is from below.”

“If you will not die for us, you cannot ask us to die for you.”

“A person who deserves my loyalty receives it.”

“Together we shared a bond not even death would violate.”

“Friendship with oneself is all-important, because without it one cannot be friends with anyone else.”

“Loyalty that is bought with money, may be overcome by money.”

“A friend is someone who walks into a room when everyone else is walking out.”

“An onion shared with a friend tastes like roast lamb.”

“If put to the pinch, an ounce of loyalty is worth a pound of cleverness.”

“The final test of a leader is that he leaves behind him in other men the conviction and will to carry on.”

“Loyalty to an unjust cause is a perversion of honor.”

“Nothing is more noble, nothing more venerable, than loyalty.”

“Respect is earned. Honesty is appreciated. Trust is gained. Loyalty is returned.”

“I place an enormous premium on loyalty. If someone betrays me, I can forgive them rationally, but emotionally I have found it impossible to do so.”

“If you cant value a commitment made by someone else, your own commitments lose their value too.”

“The only true test of loyalty is fidelity in the face of ruin and despair.”

“Staying with someone that doesn’t appreciate you isn’t loyalty, it’s stupidity.”

“My whole thing is loyalty. Loyalty over royalty; word is bond.”

“The first step in the evolution of ethics is a sense of solidarity with other human beings.”

“Loyalty is the pledge of truth to oneself and others.”

“Never befriend the oppressed unless you are prepared to take on the oppressor.”

“I look for these qualities and characteristics in people. Honesty is number one, respect, and absolutely the third would have to be loyalty.”