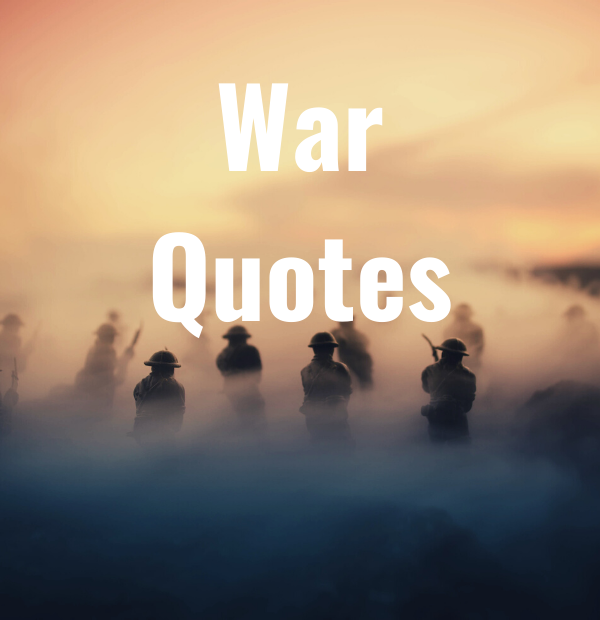 “War is peace. Freedom is slavery. Ignorance is strength.”

“You must not fight too often with one enemy, or you will teach him all your art of war.”

“Let him who desires peace prepare for war.”

“It is not enough to win a war; it is more important to organize the peace.”

“You cannot simultaneously prevent and prepare for war.”

“War does not determine who is right – only who is left.”

“I must study politics and war that my sons may have liberty to study mathematics and philosophy.”

“If everyone fought for their own convictions there would be no war.”

“Sometimes you have to pick the gun up to put the gun down.”

“It is far easier to make war than peace.”

“The supreme art of war is to subdue the enemy without fighting.”

“There is no avoiding war; it can only be postponed to the advantage of others.”

“When the war of the giants is over the wars of the pygmies will begin.”

“Let us not be deceived we are today in the midst of a cold war.”

“No one won the last war, and no one will win the next war.”

“The two most powerful warriors are patience and time.”

“There was never a good war, or a bad peace.”

“We make war that we may live in peace.”

“The quickest way of ending a war is to lose it.”

“In times of war, the law falls silent.”

“War is what happens when language fails.”

“It’s impossible to know what happens in the fog of war.”

“The best way to solve problems and to fight against war is through dialogue.”

“Ten soldiers wisely led will beat a hundred without a head.”

“War is the continuation of politics by other means.”

“Dad, how do soldiers killing each other solve the world’s problems?”

“An empire founded by war has to maintain itself by war.”

“In time of war, truth is always replaced by propaganda.”

“How can you have a war on terrorism when war itself is terrorism?”

“In war, events of importance are the result of trivial causes.”

“An unjust peace is better than a just war.”

“Those who want peace should prepare for war and be strong.”

“Never think that war, no matter how necessary, nor how justified, is not a crime.”

“War is only a cowardly escape from the problems of peace.”

“The best weapon against an enemy is another enemy.”