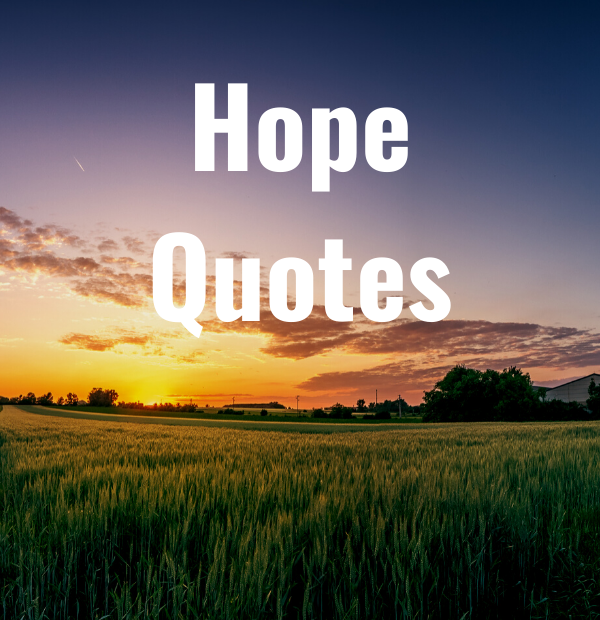 1. “Learn from yesterday, live for today, hope for tomorrow. The important thing is not to stop questioning.”

2. “As long as we have hope, we have direction, the energy to move, and the map to move by.”

5. “Hope is the only bee that makes honey without flowers.”

6. “Of all ills that one endures, hope is a cheap and universal cure.”

7. “Hope is like a road in the country; there was never a road, but when many people walk on it, the road comes into existence.”

9. “The miserable have no other medicine, but only hope.”

10. “This new day is too dear, with its hopes and invitations, to waste a moment on the yesterdays.”

11. “Everything that is done in this world is done by hope.”

14. “In all things it is better to hope than to despair.”

15. “He who has never hoped can never despair.”

16. “In reality, hope is the worst of all evils, because it prolongs man’s torments.”

17. “Hope itself is like a star – not to be seen in the sunshine of prosperity, and only to be discovered in the night of adversity.”

20. “Hope is a force of nature. Don’t let anyone tell you different.”

21. “Hope is the thing with feathers that perches in the soul and sings the tune without the words and never stops at all.”

22. “What seems to us as bitter trials are often blessings in disguise.”

23. “In the unlikely story that is America, there has never been anything false about hope.”

24. “Hope is the only universal liar who never loses his reputation for veracity.”

25. “Hope is such a beautiful word, but it often seems very fragile. Life is still being needlessly hurt and destroyed.”

27. “Hope sees the invisible, feels the intangible, and achieves the impossible.”

29. “Most of the important things in the world have been accomplished by people who have kept on trying when there seemed to be no hope at all.”

30. “Hope is a good thing, maybe even the best of things, and good things never die.”

31. “However bad life may seem, there is always something you can do and succeed at. Where there’s life, there’s hope.”

32. “Hope is a renewable option: If you run out of it at the end of the day, you get to start over in the morning.”

34. “Hope is one of the principal springs that keep mankind in motion.”

35. “Hope is the companion of power, and mother of success; for who so hopes strongly has within him the gift of miracles.”

36. “He who has health has hope, and he who has hope has everything.”